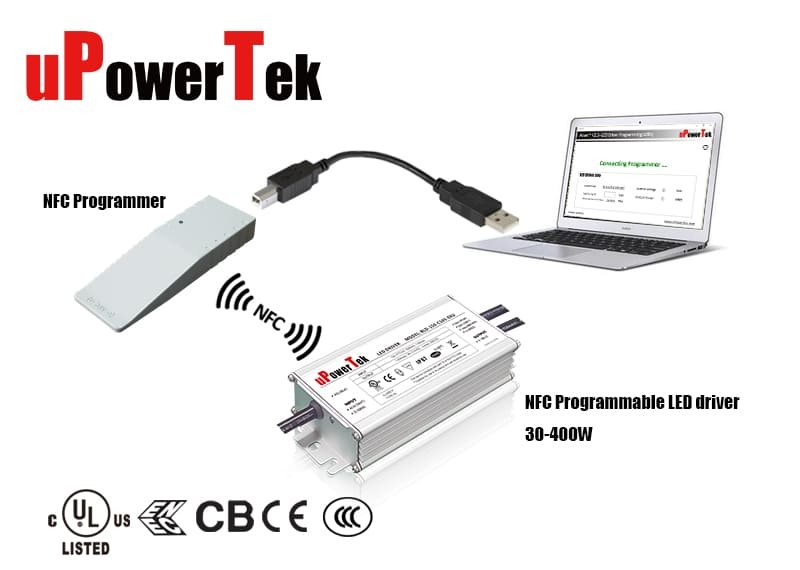 Nowadays, most of the LED drivers in the market supports programming output current and other parameters, this article describes how to program the LED driver by NFC technology.

NFC (Near Field Communication) is now frequently involved in everybody’s digital life, such as transportation, security, payment, cellphone data exchange and tags.  It is a kind of short-range wireless communication technology firstly developed by Sony and NXP, and then TI and ST made more choices to make NFC more widely adopted and cheaper in consumer electronics. Now it is also applied to outdoor programming LED drivers

Basically NFC is derived from RFID technique and carried by 13.56MHz radio frequency.  And it has only 424kbit/s bi-directional transmission speed within 10cm distance.

NFC technology will be compatible with a wider variety of devices, giving the opportunity for future growth unlimited. NFC fixtures are able to work in both active and passive status. The devices to be programmed are operating primarily in passive mode, which can have good power savings.  Active NFC fixtures like programmer or PC can supply all the power needed for communication with passive devices through RF field.

Below is the figure which illustrates how NFC devices work together.

NFC is standardized in ECMA 340 as well as ETSI TS 102 190 V1.1.1 and ISO/IEC 18092, which specify the modulation schemes, coding, transfer speeds, and frame format of the RF interface of NFC devices.

3. Comparison with Other Protocols

NFC has multiple reasons to become the most popular wireless near field protocols as below.

Since NFC is also available on cellphone, uPowerTek LED drivers also support cellphone NFC programming. Users could use the cellphone to adjust the output current and DMX dimming address. Here is the video introduction.

I guess you would like to learn more about the NFC programming LED drivers, here are some featured prducts.