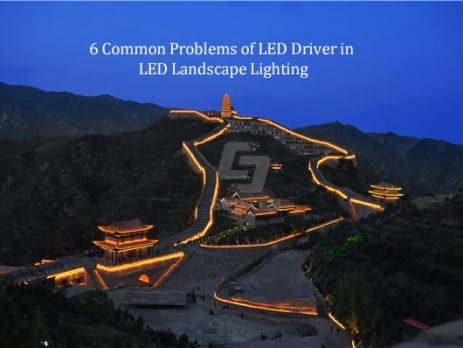 With the development of social economy and the improvement of people’s quality of life, people have put forward higher requirements for the urban environment. As a symbol of urban development, urban landscape lighting has attracted more and more attention. Landscape lighting is an important part of the public lighting system. A good public lighting system helps to form a positive urban image. It not only beautifies the urban environment, but also reflects the city’s economic strength and modernization level.

1. The safety of landscape lighting systems

After years of application technology accumulation, LED lighting has been basically mature, and has been applied in the lighting industry for a long time. It has entered a period of rapid development. LED landscape lighting can also be said to be an art, an artistic embodiment of the historical heritage of the city. To light up the art, it requires reliable electrical protection, and selects LED driver that comply with relevant national laws and regulations, but in actual application there are still some problems such as the requirements of LED driver including high efficiency, high power factor, high current control accuracy, high reliability, safe isolation, EMI compliance, small size, low cost, etc., the main performance is as follows:

People-oriented: in the landscape lighting place, personal safety should be taken as the first element, the selected LED driver must comply with the corresponding safety standards. In the process of installation and construction, we must strictly follow the manufacturer’s using instruction, and related operating guidelines for specification Operation and construction; when electrical failure occurs in the lighting circuit and LED driver, in order to prevent personal electric shock, electrical circuit damage and electrical fire, short circuit protection, overload protection and grounding protection shall be provided to cut off the LED driver or issue an alarm signal.  For this purpose, fuses, circuit breakers and residual current protectors are generally used for protection.

The following aspects should be noted when selecting the corresponding LED drivers:

(1) Try to use an electrically isolated LED driver.

(2) The insulation resistance of the live part and the ground of the LED driver is greater than 2MΩ.

(3) The metal casing part of the LED driver must be reliably grounded and clearly marked.

In outdoor LED landscape lighting applications, special attention should be paid to the problem of waterproofing, as moisture penetration may cause short-circuiting of the LED driver. In order to be rigorously waterproof, manufacturers will use a variety of waterproof components, whether it is the design of the outer casing or the internal potting, generally will in strict accordance with the IP65 or even IP67 level, but in actual use there still occurs some phenomenon of damage LED driver due to waterproofing for the following reasons:

(1) The construction person at the landscape lighting construction site did not have professional training. When installing the LED driver, they did not follow the instructions. The installation angle, position, environment, wiring, sealing and other problems occurred, which eventually led to the waterproofing problems occur in utilization.

(2) Selecting inferior LED driver that does not meet the waterproof rating requirements. The casing material of such inferior LED driver is rough, the assembly is irregular, and the gap is filled with water. The inside of the driver is made of potting glue with poor waterproof performance, and some filling half. The glue fills half of the internal case or even without filling, which cannot effectively prevent the components on the PCB from being damaged by contact with water.

(3) Do not use the products according to the restricted use conditions; the using environment exceeds the protection level of the product that resulting in successive damage of the final product.

The surge impact of a lightning strike is a transient wave, a transient disturbance of a subtle level of duration, either a surge voltage or a surge current. Transfer to the power line along a power line or other path (conducting lightning) or by an electromagnetic field (inductive lightning). Its waveform characteristics are firstly rising rapidly and then slowly decreasing. This phenomenon can have a fatal effect on the driver, and the lightning protection design must be considered for outdoor LED drivers.

According to the relevant international standard IEC61000-4-5, the input port of LED driver must meet the requirements of this standard: it can withstand the wave between line and line 2KV, line to ground 4KV (ie differential mode 2KV, common mode 4KV standard) Surge. At the same time, this is also required for the AC power port of LED lamps. In order to solve this contradiction and improve the reliability of products, many LED outdoor lamps are often solved by increasing the internal lightning protection level of the LED driver or adding a separate surge protector.

In addition, there are some considerations regarding the proper installation and use of LED drivers. If the driver must be grounded reliably, be ensure that the impact energy has a fixed path to bleed; use a dedicated line to power the outdoor LED driver and avoid large mechanical and electrical equipment around to avoid the surge impact when the electromechanical equipment starts or shuts down; control the total load of the lamps (or drivers) on each branch to avoid the surge impact caused by the load being too large. The knives are properly configured, and the opening or closing must be carried out step by step. These can effectively avoid the surge of operation, which makes the LED driver work more reliably.

The landscape light control system has the functions of wireless remote control, telemetry, remote signaling, etc. It adopts digital, intelligent and modular data acquisition terminals, and uses wireless network connection with the upper computer. The general control room is equipped with a centralized monitoring system. Manager control and manage the whole landscape lights and lighting centralized control system of the entire city through the mobile phone and map interface, and also has on-site manual control functions. Therefore, the matching of the LED driver and the control system should pay attention to the following problems:

(1) The interface between the LED driver driver and the control system need to be matched with the communication protocol.

(2) Safety issues of LED driver and control systems need to comply with relevant standards and regulations.

(3) LED driver and control system installation needs to meet the requirements of their environmental conditions.

6. The problem of LED driver’s lifetime

(1) Impact of the actual application environment:

(2) The influence of the environment temperature of the LED lamp:

the internal temperature of the lamp is less than 65 degrees, the lamp housing is less than 75 degrees, and the driver temperature is less than 60 degrees. Because not only the driver itself will heat up, but also the lamps. How to properly dissipate these two heat sources is a problem that the lighting design engineer must consider. It is necessary to prevent excessive concentration of heat to form a heat island effect, and affect the lifetime of the driver.

(3) Impact of the driver grid:

(4) Effects of insulation and installation:

Proper installation of the product and good insulation enhance the vitality of the LED driver.

The LED driver has a capacitor input type rectifying circuit inside. When the power is turned on, a surge current is generated. This inrush current will impact the internal components of the driver, thereby affecting the lifetime of LED driver.

In short, the beautiful night view of the modern city relies on the outdoor LED landscape lighting and they reflect the cultural taste of the city. It needs scientific planning, ingenious planning and perfect design to achieve harmony between human and the environment. At the same time, we must pay attention to the problems in the application process of control system and LED driver. Improving its reliability so it can bring a beautiful scenery to the city night. Because landscape lighting is given a lot of positive meaning, colorful radiant and fantastic shine. It not only reveals the spirit of the city’ s vitality and enthusiasm, but also symbolizes the good wishes for the prosperity of the country and the world.