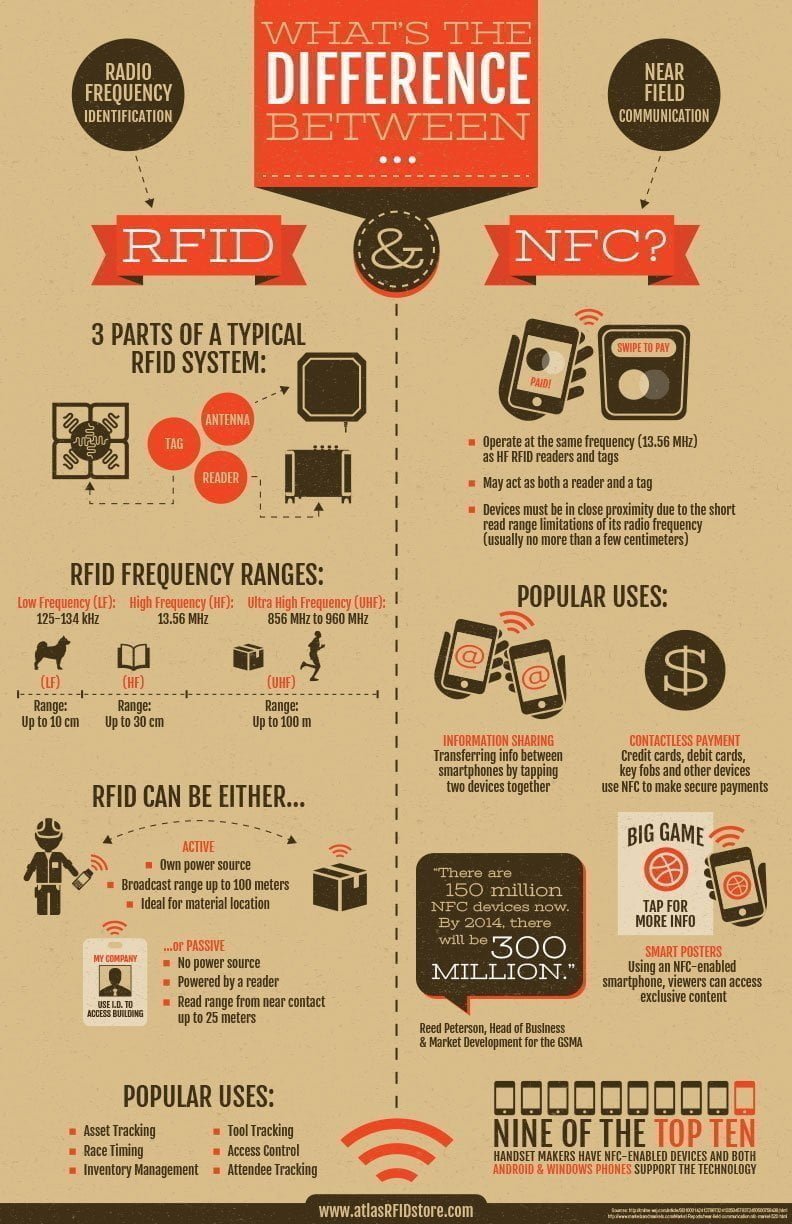 If you follow developments in the tech industry on a semi-regular basis, you’re likely familiar with the terms near-field communication (NFC) and radio frequency identification (RFID). Recently, you may have seen RFID in the news, or you may have been told that your cell phone is an NFC device. In any case, this article will answer a few questions you may have about RFID and NFC. 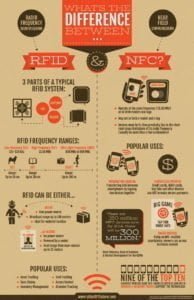 Originally published on April 22, 2013 and updated on October 11, 2013: To help illustrate the differences between NFC and RFID, we created this neat infographic

What are the differences between NFC and RFID, or are they even different at all?

Short Answer:
RFID is the process by which items are uniquely identified using radio waves, and NFC is a specialized subset within the family of RFID technology. Specifically, NFC is a branch of High-Frequency (HF) RFID, and both operate at the 13.56 MHz frequency. NFC is designed to be a secure form of data exchange, and an NFC device is capable of being both an NFC reader and an NFC tag. This unique feature allows NFC devices to communicate peer-to-peer.

Long Answer:
By definition, RFID is the method of uniquely identifying items using radio waves. At a minimum, an RFID system comprises a tag, a reader, and an antenna. The reader sends an interrogating signal to the tag via the antenna, and the tag responds with its unique information. RFID tags are either Active or Passive.

Active RFID tags contain their own power source giving them the ability to broadcast with a read range of up to 100 meters. Their long read range makes active RFID tags ideal for many industries where asset location and other improvements in logistics are important.

Passive RFID tags do not have their own power source. Instead, they are powered by the electromagnetic energy transmitted from the RFID reader. Because the radio waves must be strong enough to power the tags, passive RFID tags have a read range from near contact and up to 25 meters.

Near-field communication devices operate at the same frequency (13.56 MHz) as HF RFID readers and tags. The standards and protocols of the NFC format is based on RFID standards outlined in ISO/IEC 14443, FeliCa, and the basis for parts of ISO/IEC 18092. These standards deal with the use of RFID in proximity cards.

As a finely honed version of HF RFID, near-field communication devices have taken advantage of the short read range limitations of its radio frequency. Because NFC devices must be in close proximity to each other, usually no more than a few centimeters, it has become a popular choice for secure communication between consumer devices such as smartphones.

Peer-to-peer communication is a feature that sets NFC apart from typical RFID devices. An NFC device is able to act both as a reader and as a tag. This unique ability has made NFC a popular choice for contactless payment, a key driver in the decision by influential players in the mobile industry to include NFC in newer smartphones. Also, NFC smartphones pass along information from one smartphone to the other bytapping the two devices together, which turns sharing data such as contact info or photographs into a simple task. Recently, you may have seen advertising campaigns that used smart posters to pass information along to the consumers.

Also, NFC devices can read passive NFC tags, and some NFC devices are able to read passive HF RFID tags that are compliant with ISO 15693. The data on these tags can contain commands for the device such as opening a specific mobile application. You may start seeing HF RFID tags and NFC tags more frequently in advertisements, posters, and signs as it’s an efficient method to pass along information to consumers.

At the end of the day, NFC builds upon the standards of HF RFID and turns the limitations of its operating frequency into a unique feature of near-field communication.

Do you have an NFC enabled smartphone? Leave a comment below telling us if you have or haven’t used your phone’s NFC capabilities.